Sam Norman - The Founder of BAL-AMi

The following article appeared in a local Ilford newspaper on March 8th, 1962, the week after Sam Norman died. 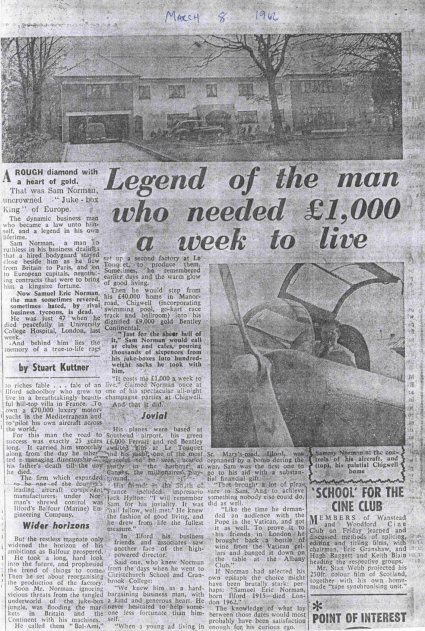 The full text of the article above is as follows:

A rough diamond with a heart of gold. That was Sam Norman, uncrowned 'Jukebox King of Europe'. The dynamic businessman who became a law unto himself, and a legend in his own lifetime.

Sam Norman, a man so ruthless in his business dealings, that a hired bodyguard stayed close beside him as he flew from Britain to Paris, and on to European capitals, negotiating contracts that were to bring him a king-size fortune.

Now Samuel Eric Norman, the man sometimes revered, sometimes hated, by rival business tycoons, is dead. He was just 47 when he died peacefully in University College Hospital, London, last week. And behind him lies the memory of a true-to-life rags to riches fable ... a tale of an Ilford schoolboy who grew to live in a breathtakingly beautiful hilltop villa in France. To own a £70,000 luxury motor-yacht in the Mediterranean and to pilot his own aircraft across the world.

For this man the road to success was exactly 25 years long. It carried him smoothly along from the day he inherited a managing directorship upon his father's death till the day he died. The firm which expanded to be one of the country's leading aircraft component manufacturers under Norman's shrewd control was Ilford's Balfour (Marine) Engineering Company.

But the restless magnate only widened the horizon of his ambitions as Balfour prospered. He took a long hard look into the future, and prophesied the trend of things to come. Then he set about reorganising the production of the factory.

Soon Mr.Norman, ignoring vicious threats from the tangled underworld of the jukebox jungle, was flooding the markets in Britain and the Continent with his machines. He called them 'BAL-AMi', set up a second factory at Le Touquet to produce them. Sometimes, he remembered earlier days and the warm glow of good living. Then he would step from his £40,000 home in Manor Road, Chigwell (incorporating swimming pool, go-kart race track and ballroom) into his dignified £9,000 gold Bentley Continental.

"Just for the sheer hell of it", Sam Norman would call at clubs and cafes, pouring thousands of sixpences from his jukeboxes into hundredweight sacks he took with him.

"It costs me £1,000 a week to live" claimed Norman once at one of his spectacular all-night champagne parties at Chigwell. And that it did.

His planes were based at Southend airport, his green £6,000 Ferrari and red Bentley awaited him at Le Touquet and his yacht, one of the most graceful to be seen, nestled gently into the harbour at Cannes, the millionaires playground.

His friends in the south of France included impresario Jack Hylton: "I will remember Sam for his joviality. It was 'hail fellow, well met'. He knew the fashion of good living, and he drew from life the fullest measure."

In Ilford his business friends and associates saw another face of the high-powered director. Said one, who knew Norman from the days when he went to Christchurch School and Cranbrook College:

"We knew him as a hard bargaining businessman, with a kind and generous heart. He never hesitated to help someone less fortunate than himself. When a young lad living in St.Mary's Road, Ilford, was orphaned by a bomb during the war, Sam was the first one to go to his aid with a substantial financial gift. That brought a lot of pleasure to Sam. And to achieve something nobody else could do, did as well. Like the time he demanded an audience with the Pope in the Vatican, and got it as well. To prove it to his friends in London he brought back a bottle of wine from the Vatican cellars and banged it down on the table at the Albany Club." 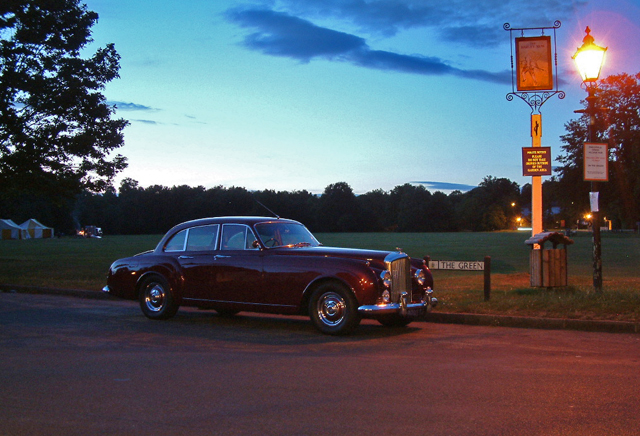 If Norman had selected his own epitaph the choice might have been brutally stark: perhaps "Samuel Eric Norman, born Ilford 1915 - died London 1962".

The knowledge of what lay between those dates would most probably have been satisfaction enough for his curious ego.

The photo caption reads: "Sammy Norman at the controls of his aircraft, and (top), his palatial Chigwell home."

This photo, taken in 2014 and kindly supplied by Mike Billmore, is of a Bentley Continental whose history shows it as having been owned by Sam Norman.