Thinking of restoring a jukebox ? Here's what you need........lots of spare cash, a spare room/garage/shed, plenty of patience, a supportive partner.........Peter May had all of the above (although he says the cash has now gone!). Here's his story of how he rescued a BAL-AMi S100 from that great musical scrapheap in the sky and brought it back to its former glory.

My first jukebox was a BAL-AMi S100 that I purchased from Terry Price at the Jukebox Madness show in 1995, where it won the award for the best Silver Age jukebox. I became so interested in jukeboxes, and intrigued by the rather Heath Robinson electromechanical genius of the way they were designed and put together, that I set about looking for another that I could undertake as a restoration project. I eventually found another S100 which was a bit of a wreck and reluctantly handed over wads of cash for it together with a box of spare parts (I hadn’t got a clue what any of them were). Did you know that you can get an S100 into the back of a Vauxhall Vectra ? When they designed that particular AMi range they must have known that the hatchback was on its way. The rake of the rear door matches the rake of the jukebox front screen beautifully! The jukebox was supposedly sold with all parts to convert to 200 play. Not true....but then how was I supposed to know?

I dismantled the jukebox down to the last nut and bolt and spent the next nine months painstakingly restoring every bit in anticipation of it all going back together again and working perfectly. This of course assumed that all the necessary bits were there in the first place. This is why it was a good idea to restore the same model as I already had, as I was able to use the good one as blueprint. Believe you me I was glad I had it. It’s amazing how when you take something apart you’re convinced that putting it back together again will be a doddle. Come back to it a few days later and it’s a different story when the gremlins seem to have changed the parts for bits that don’t look like they go anywhere, however hard you try. 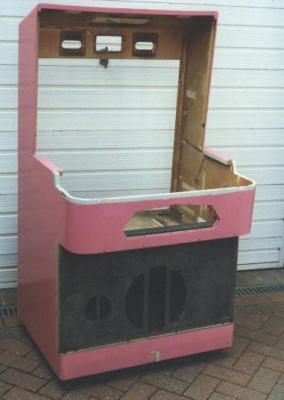 All metal parts were re-chromed and I had to get some of the trim re-made as it was beyond re-chroming. This was becoming an expensive business and I began to see why dealers charge such high prices for a fully restored jukebox. For anyone living in the London area I can fully recommend The London Chroming Co. in the Old Kent Road. They are not cheap but really look after your bits down to the smallest piece. They are also able to re-chrome the cast parts as well as pressed steel. It’s important to use a plating company who know what they are doing. Drop your cast parts into the wrong tank and they’ll just dissolve!

As my first jukebox had been converted to 200 play from its original 100 status I wanted to do the same with my second one. This is a fairly simple procedure provided you’ve got the replacement 20 position sprag wheel, arm and magnets set. Guess what? These most important parts were not evident in the box of juke jumble I had purchased with the jukebox. So much for buying with ‘all parts to convert’. After many enquiries and being told on more than one occasion that I was unlikely to find the parts I wanted I was feeling a bit dejected and started to understand that there were more reasons to kick a jukebox other than it didn’t play the record you just paid good money for. However, those jolly nice people at Jooks (no longer trading unfortunately) came up trumps and I purchased a set at a very reasonable price. The 10 position plastic number selector dials on these jukeboxes were all pressed as 20 select and then repainted to use only ten number positions. All you need to do is remove all the paint from the wheel and carefully repaint it using the full twenty numbers. The 100 select mechanism only used a hundred pins positioned in every other hole in the pin wheel so you also need another hundred of these to fill in all the spare holes (yippee they WERE in the box of bits!). The last thing to do is to renumber the record basket to use every slot instead of every other one. The Jukebox Man supplied a set of decals to help here (but what a boring job it was sticking those on!). Et voila, I had a 200 select jukebox! 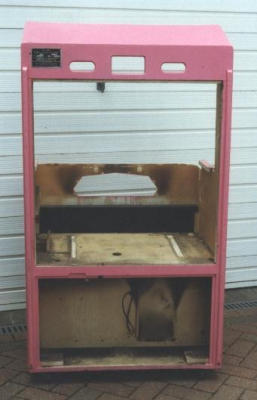 While all this was going on the amplifier was away being restored. Did I say amplifier? It was more a chassis full of odd electronic components soldered together to see what might happen. It was pretty lethal and had it been connected to the mains whilst installed in the jukebox a press on the select button would probably have meant I wouldn’t be here now to tell the tale. Another mortgage later and I had a fully restored amplifier (only the chassis looked original!).

I eventually got everything back together again and with a completely re-sprayed body and new chrome it looked beautiful. Now to hear what it sounded like! Well I’m the world’s biggest optimist. I hadn’t seen any of the moving parts actually moving as yet and nor was I going to, as every time I started the mechanism the DC circuit fuse blew. The turntable worked fine and with the amplifier now working I could at least listen to a record but you can only stand listening to Heart And Soul by The Cleftones so many times before you get sick of it. Listening to it now still reminds me of frustrating cold evenings in the garage blowing fuse after fuse, with my wife asking when she would be able to get her car back in.

The only answer was to take the mech out and try to solve the problem on the bench. Just how many times I lifted that mech in and out I don’t recall, but it beats lifting weights to tone up your muscles. I blew so many fuses trying to find the short that Tandy (also no longer trading!) had to get some on special order for me, but eventually the problems were solved. There were no less than three dead shorts between the wiring on some of the old solenoids and the mech itself, but finding them took ages and much greying of hair. These mechs run on about 28 volts DC which comes from a transformer housed in the amplifier. To avoid having to use this as a power source I simply used an old 12 volt model train transformer to provide the mech power. This provided enough juice to make it operate and at a speed which was slow enough to watch the parts moving and identify where the problems might be. It was very satisfying to see the mechanism working as it should after so much aggro. Seeing it actually operating successfully inside the jukebox instead of on the bench was even better. It sounded great too with the rebuilt amplifier except for an ’orrible ’um which didn’t seem to want to go away.This proved to be an earthing problem and entailed re-routing some wiring inside the amp. That done everything was fine. 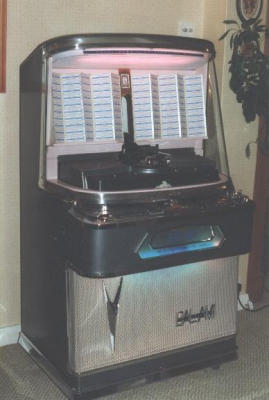 I found this a very satisfying project and I feel that perhaps I’ve managed to save a little bit of history rather it being consigned to the scrap heap. Although I was rather loath to part with it, two jukeboxes residing in one dining room for a long period of time is a little over the top. I’m glad to say it found a new home and its new owner seems very happy with it.

From this early restoration experience, I now restore jukeboxes commercially.